Tickets include a full length viewing of the play, followed by a talk back with star Elaine Bromka and actual recipes of the First Ladies so you can join us with dessert!

What is it like for a woman when her husband becomes the President of the United States – and she is suddenly thrust into the spotlight? TEA FOR THREE: Lady Bird, Pat & Betty explores the hopes, fears, quirks and loves of Lady Bird Johnson, Pat Nixon and Betty Ford in what Mrs. Nixon called “the hardest unpaid job in the world.”

On Saturday morning, August 2, some of our branch members took a wonderful guided nature walk on More Mesa with a docent from the More Mesa Preservation Coalition, Valerie Olson. We heard the fascinating history of the approximately 250 acre site, including a scandal involving bribery of public officials in the 1980s by those wanting to develop the area into luxury homesites! We saw several varied habitat areas: grassland, oak woodland, coastal scrub, vernal pools (now dry, but wait until it rains!), as well as cottonwood groves and non-native eucalyptus groves and fields of fennel. We saw two white tailed kites hovering as they hunted, but unfortunately the overcast cool conditions seemed to be keeping all the other birds and butterflies in hiding! We hope to return with Valerie later in the year, after it has rained, to see the transformation of this local treasure. 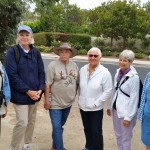 Branch members gather with our docent, Valerie Olson (left), as we start our More Mesa hike. 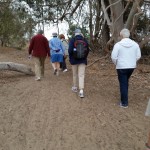 On the trail to the vernal pools. 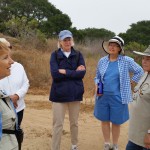 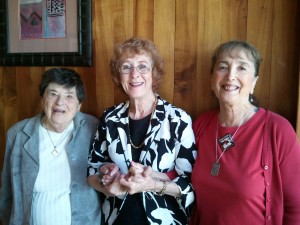 Postpartum Education for Parents (PEP) is a local non-profit dedicated to supporting and educating new parents on all aspects of dealing with parenthood. It began as a project of the Goleta Valley branch of AAUW, specifically from a Research and Projects grant from what was then the AAUW Educational Foundation (now AAUW Funds). branch members Jane Honikman was the driving force behind this project.

This spring PEP launched a new project called “Baby Steps” which is an outreach program to assist other communities in establishing similar programs, utilizing in part a book written by Jane Honikman. To launch this new project, PEP held a celebration on March 14, 2013, and at this event, the local AAUW branch was honored as their “mother.” Jane Honikman was also specifically honored for her work in helping with this particular project of PEP. Many of our branch members attended this lovely event. 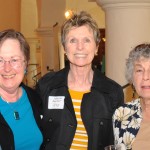 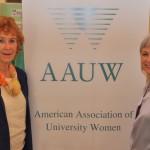 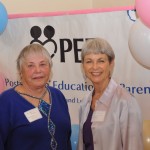 Branch member Cathy Black and Jane Honikman in front of the PEP banner. 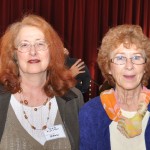 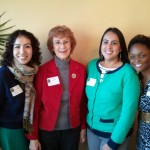 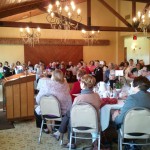 The branch participated in a panel discussion sponsored by the Santa Barbara Women’s Political Committee. 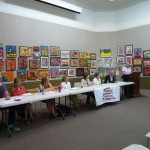 Claire VanBlaricum is seated on the panel (second from the right), and at the lectern is branch member Mary Rose, who was moderator for the panel. 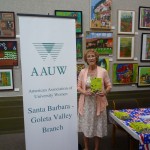